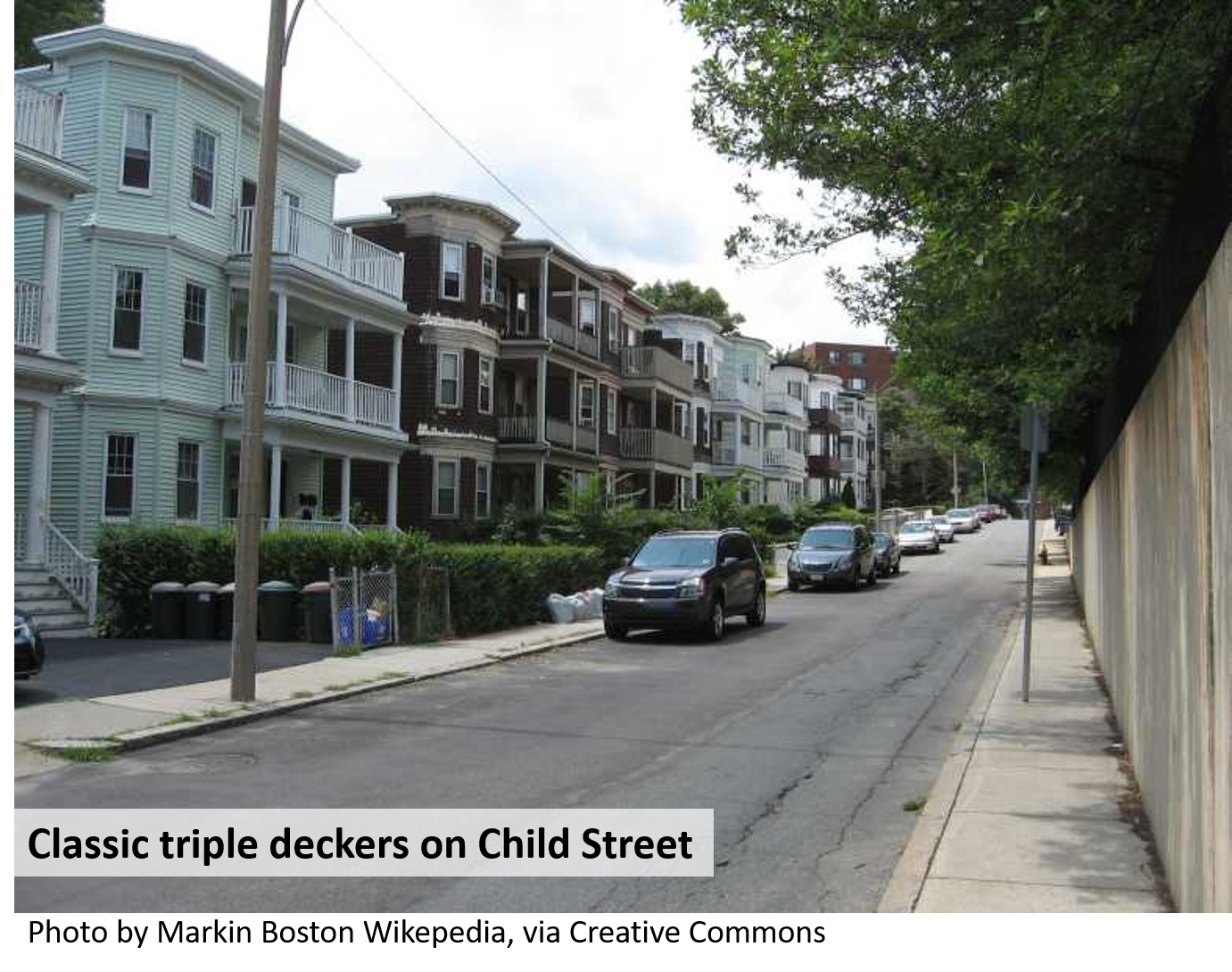 Locals call Jamaica Plain “JP.” The classic streetcar suburb that has become one of Boston’s most dynamic neighborhoods. A neighborhood of 4.4 square miles (11 km2) in Boston, Massachusetts, US. Founded by Boston Puritans seeking farm land to the south, it was originally part of the town of Roxbury. Jamaica Plain became one of the first streetcar suburbs in America and home to a significant portion of Boston's Emerald Necklace of parks, designed by Frederick Law Olmsted.

You’ll see a mix of cultures in local businesses, shops and restaurants along all of the Main Street business districts that could easily fill up a weekend afternoon, or night out with friends 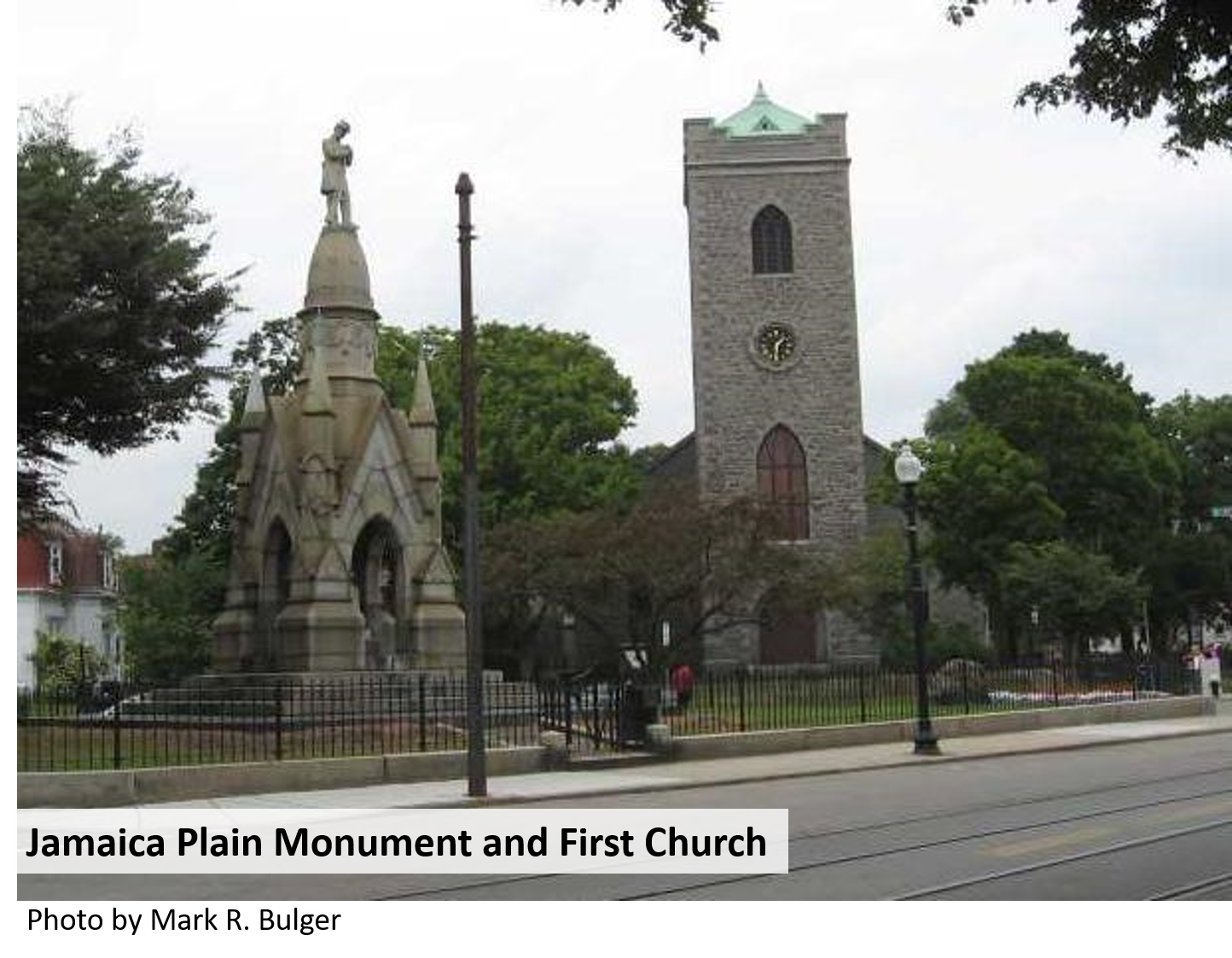 The area is home to a diverse community culture including:

Students in Jamaica Plain are served by Boston Public Schools (BPS). BPS assigns students based on preferences of the applicants and priorities of students in various zones. The English High School located in Jamaica Plain is one of the first public high schools in America.

Private schools in the area include the British School of Boston and SHOWA. 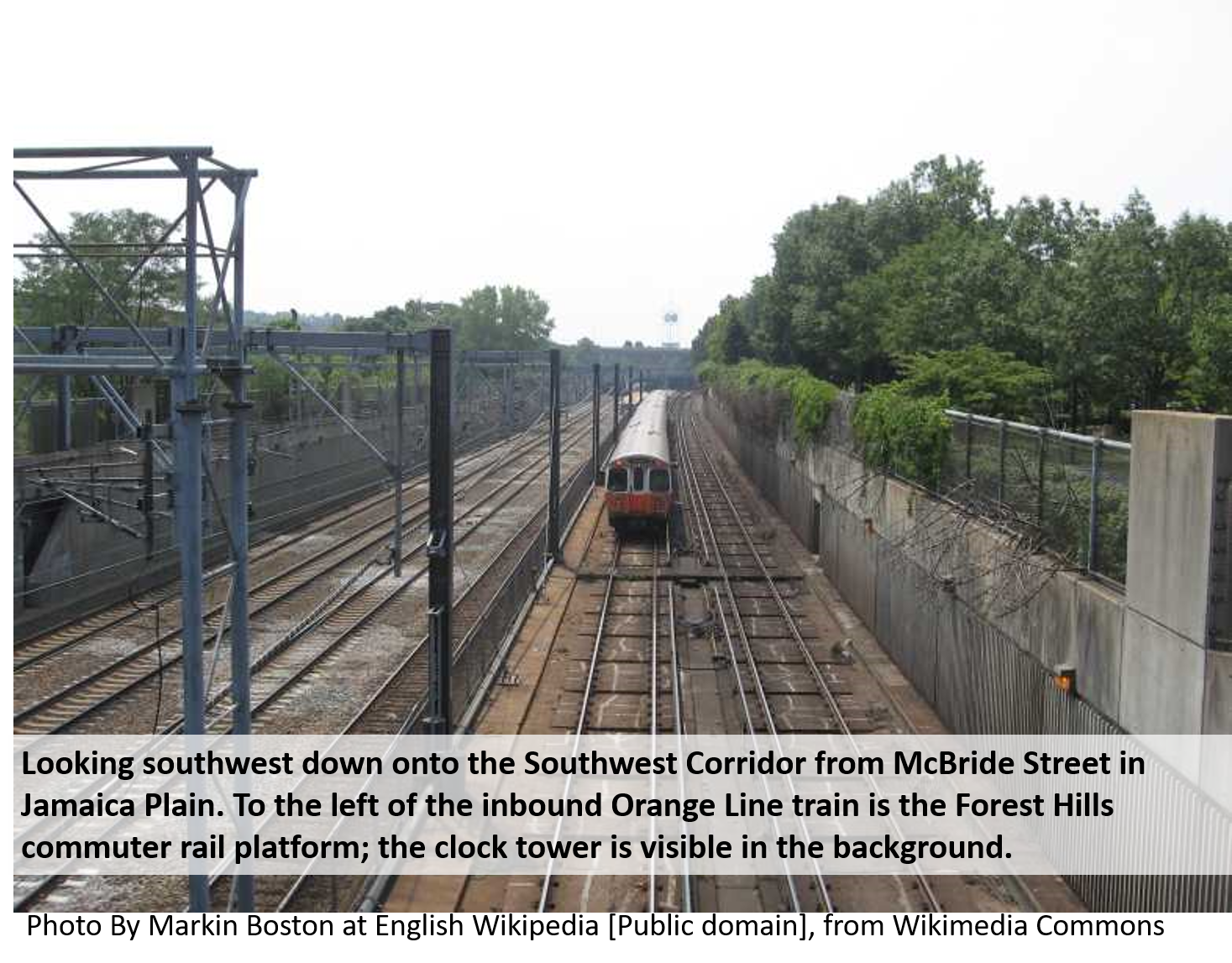 The Green Line's "E" Branch streetcar service terminates at Heath Street and South Huntington Avenue. Bus service continues along South Huntington Avenue, Centre Street, and South Street to its terminus at the Forest Hills Station. The Orange Line rapid transit train line runs below street level through the middle of Jamaica Plain, with stops at Jackson Square, Stony Brook, Green Street, and Forest Hills. Buses connect Jamaica Plain with Roslindale, West Roxbury, Hyde Park, and suburban Dedham, Westwood and Walpole to the south, and the rest of Boston by street routes. Forest Hills Station is a major transportation hub and is within walking distance of the Arnold Arboretum and Forest Hills Cemetery.

The Needham Line of the Commuter Rail stops at Forest Hills Station, and many other lines are easily accessible by riding the Orange Line subway train to Ruggles and Back Bay.

Two major bicycle paths serve Jamaica Plain. Along the Southwest Corridor Park is the Pierre Lallement Bicycle Path, which runs from Forest Hills to Back Bay. To the west are bicycle paths, which run through the parks of the Emerald Necklace, along the Jamaicaway and Riverway. 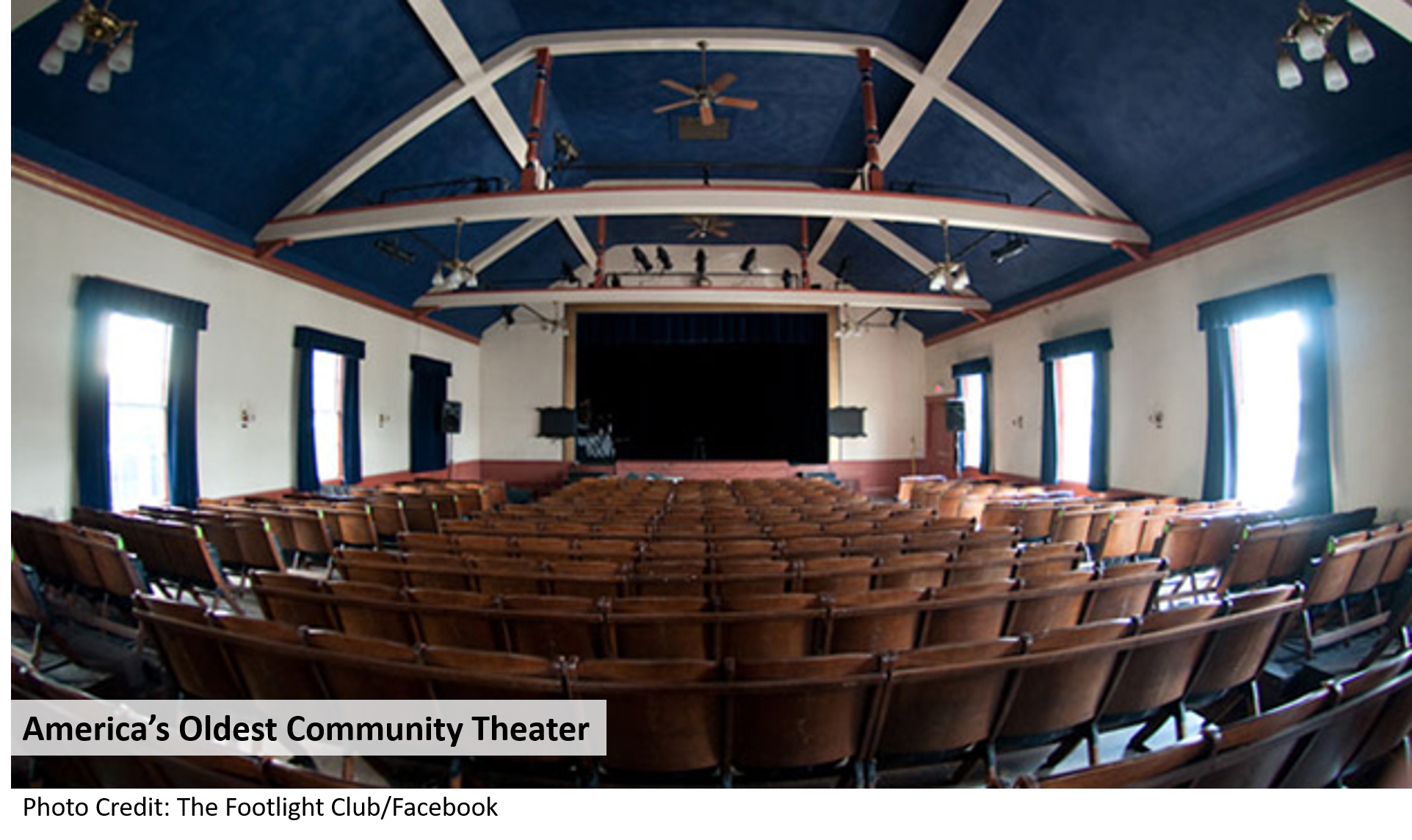 Many people from Jamaica Plain and the greater Boston area enjoy watching performances by the Footlight Club, America’s oldest community theatre. Since 1877, this club of local actors has performed in Eliot Hall, a cozy and charming theater. The club is welcome to members of all ages, and puts on performances for children, adult, and mixed audiences. Some notable plays include “Sweeney Todd,” and “A Midsummer Night’s Dream.” The club also puts on musicals such as “Rent” and “Sound of Music.”

2. Green in Many Ways

Jamaica Plain, often referred to in the 19th century as "the Eden of America," is one of the greenest neighborhoods in the city of Boston. The community contains or is

bordered by a number of jewels of the Emerald Necklace park system designed in the 19th century by Frederick Law Olmsted:

These parks are connected by parkways, each of which is also part of the Emerald Necklace. From south to north these are the Arborway, the Jamaicaway, and the Riverway.

3. Home To An Engineering Pioneer

Ellen Swallow Richards, the first female graduate of the Massachusetts Institute of Technology, lived in Jamaica Plain. Richards was also the first female teacher at MIT and became a pioneer in environmental engineering. Her Italian-style house, located at 32 Eliot St., became a National Historic Landmark in 1992.

Jamaica Plain is the proud home to three Memorial Day monuments. The Civil War monument is located at the corner of Centre and South Streets, in the center of Jamaica Plain. The sculpture is a 34-feet-tall gothic archway with a pensive soldier standing on top. As for the World War I and II memorial, it is harder to find. A slab with fallen soldiers’ names is fixed to a five-foot stone that sits in the grass near the intersection at Centre Street and the Arborway. A third memorial, for the Vietnam War, is also hard to find because it blends into Jamaica Plain’s nature. Seven trees were planted in front of Curtis Hall, now seen as a living memorial. Additionally, a plaque for Jamaica Plain soldiers in the Revolutionary War is attached to a boulder located at the burial site near the Walter Street side of the Arboretum.

THINGS TO DO AND SEE IN JAMAICA PLAIN

The Jamaica Plain neighborhood in Boston is home to parks and natural landmarks that are part of the Emerald Necklace. It is a diverse community that is the home to many college-educated professionals, artists, and political activists. With such an interesting population and geographic location, there are plenty of ways to keep busy in Jamaica Plain. 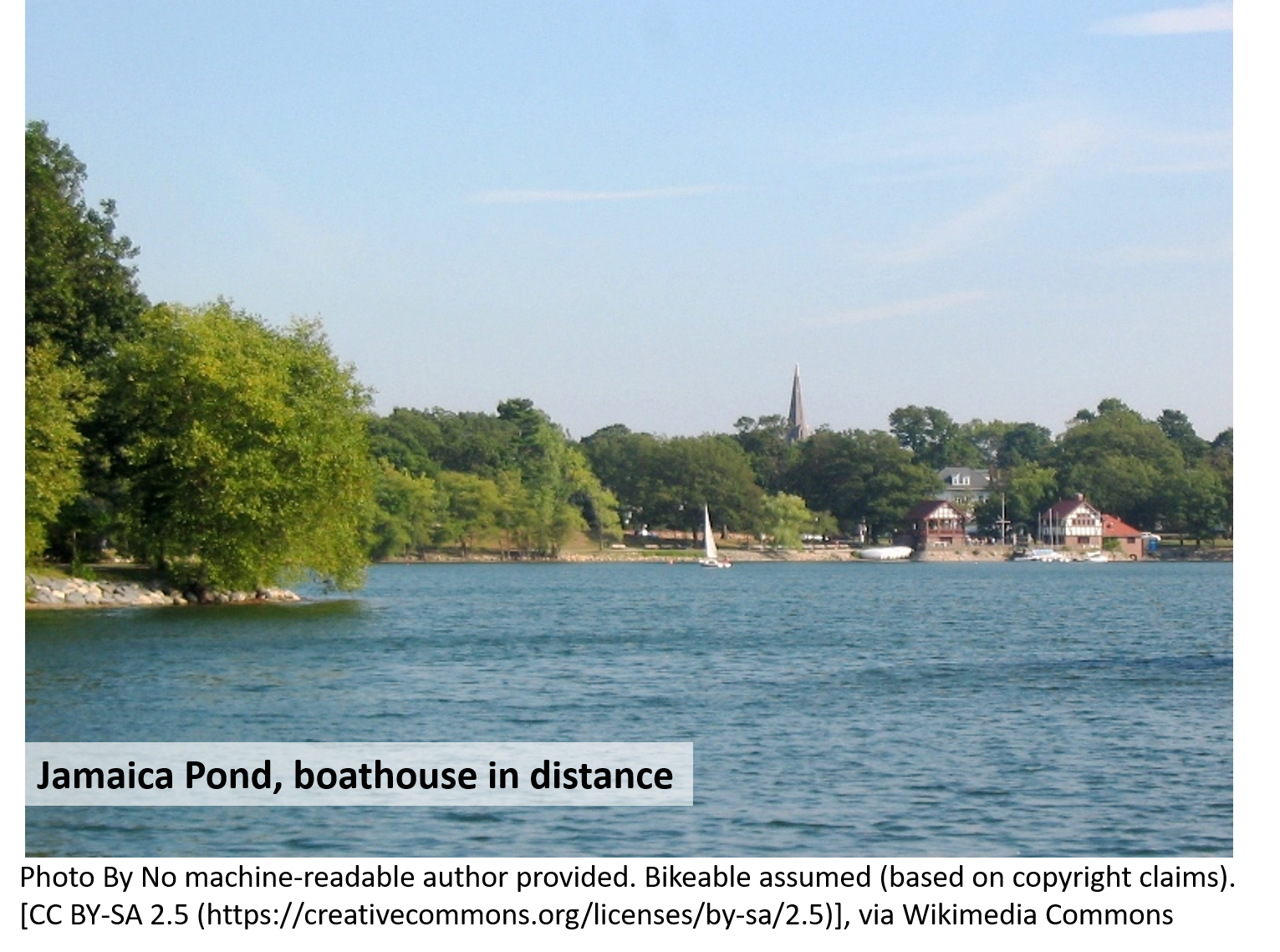 Dive into the Boston’s natural beauty

Jamaica Pond was first included in Boston’s Emerald Necklace, a 1,100-acre chain of linked parks, in 1892. Watergoers can rent rowboats, kayaks, and sailboats from the Jamaica Pond Boat House to explore the pond, which is an average of 25 feet deep. It’s also possible to fish off boats in Jamaica Pond, making it the perfect family destination. All in All, Jamaica Pond, is a Central Park in the middle of Boston, and a great way to get your nature fix in the city.

Tres Gatos – the bookstore/cafe turned tapas bar – was rated among Boston’s Top 50 Restaurants by Boston Magazine. The book and record store in the back of the restaurant gives it an artsy, quaint atmosphere. Service is superb and the food served is very creative, ranging from spicy dill pickles to soft shell crab and vegetarian paella. This charming tapas place is the perfect place to go for any occasion ranging from a nice birthday dinner to curling up – gato style! – with a glass of red wine and a book. 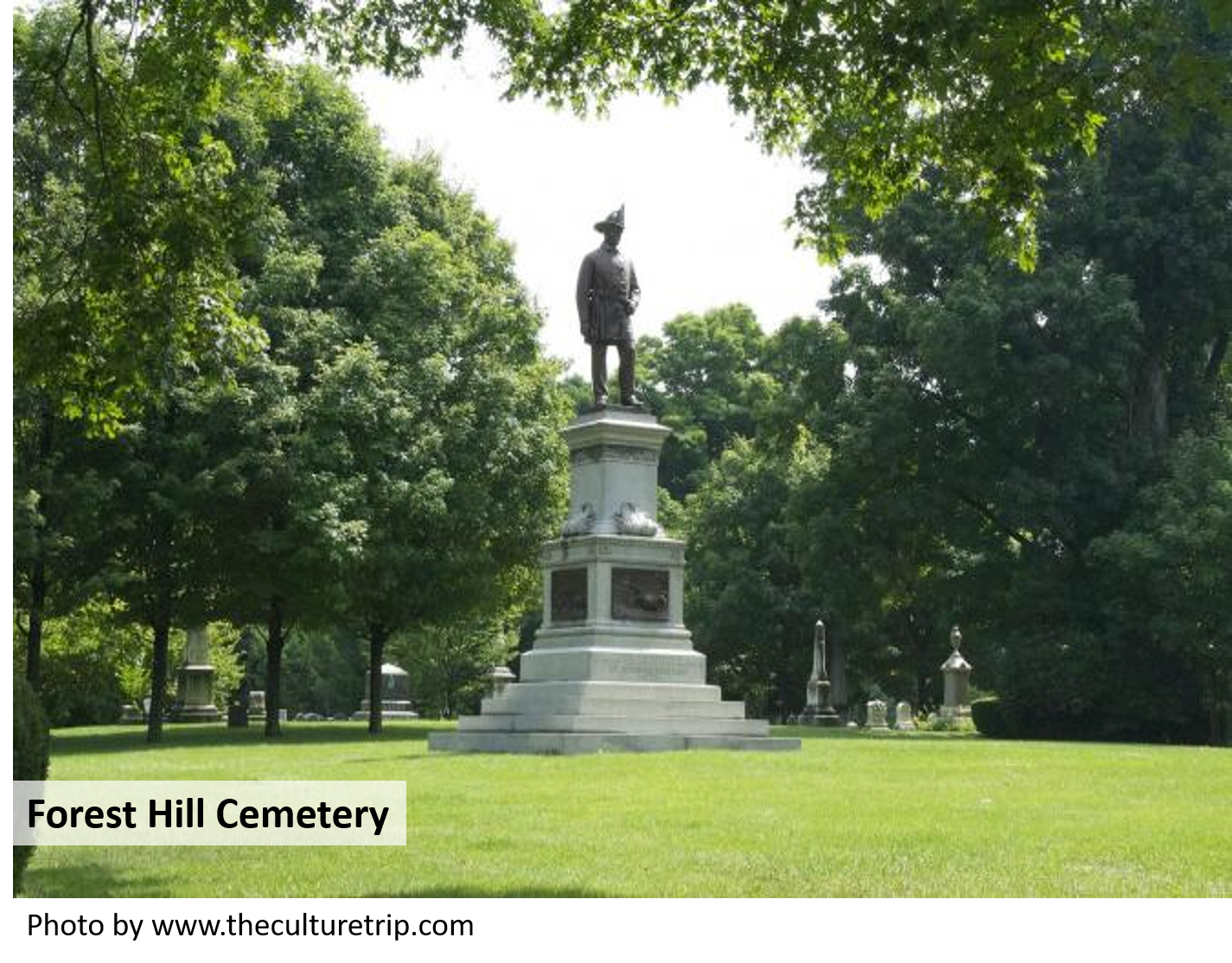 In addition to being a cemetery, the historic 275-acre burial ground is also a greenspace, arboretum, and home to a beautiful sculpture garden. It is the final resting place of author e.e. cummings, poet Anne Sexton, and suffragist Alice Stone Blackwell, as well as containing several famous statues and memorials including the Firemen’s Monument by renowned Nova Scotian sculptor John Wilson. With dozens of walking tours available every season, it’s easy to delve into the rich history of this splendid cemetery garden.

Natural scenery in an urban setting

The Arnold Arboretum of Harvard University was designed by Frederick Law Olmstead in 1872 and is part of Boston’s Emerald Necklace. It consists of 281 acres of 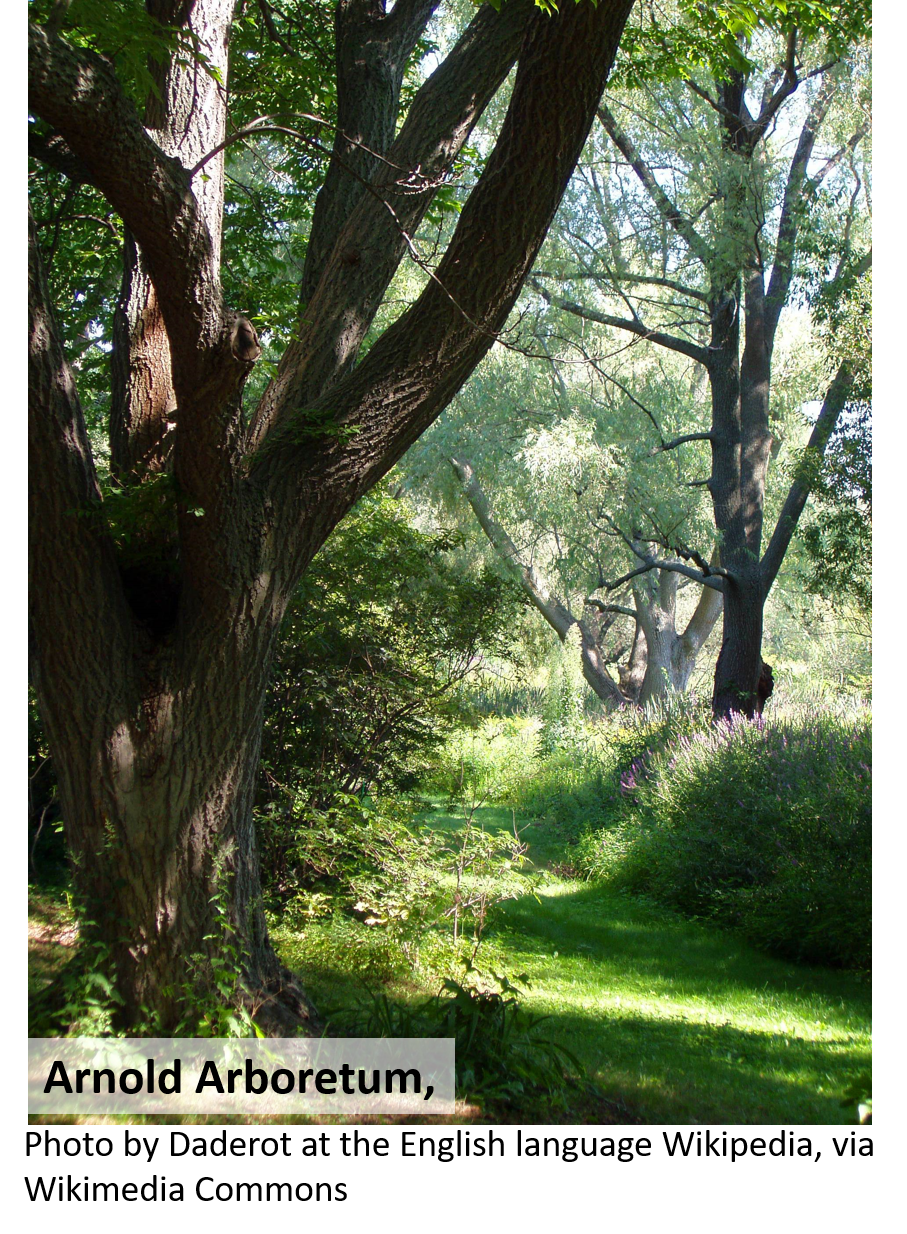 greenery – its mission, to increase knowledge of the biology and evolution of woody plants. To shine a spotlight on one of the Arboretum’s highlights, the second Sunday in May is ‘Lilac Sunday,’ and the only day of the year that picnicking is permitted. All in all, the Arboretum is a scenic way to explore the nature side of urban Boston.

The Hallway Gallery, located on a narrow strip of commercial property, somehow manages to be simultaneously modern and vintage. The yellow and red paint job enhances the old-fashioned tin ceilings, while also creating an interesting, comfortable environment to view local art. The gallery space hosts quality shows from local artists, and is easily accessible to a wide variety of audiences ranging from serious artists to curious passer-bys.

For the love of beer 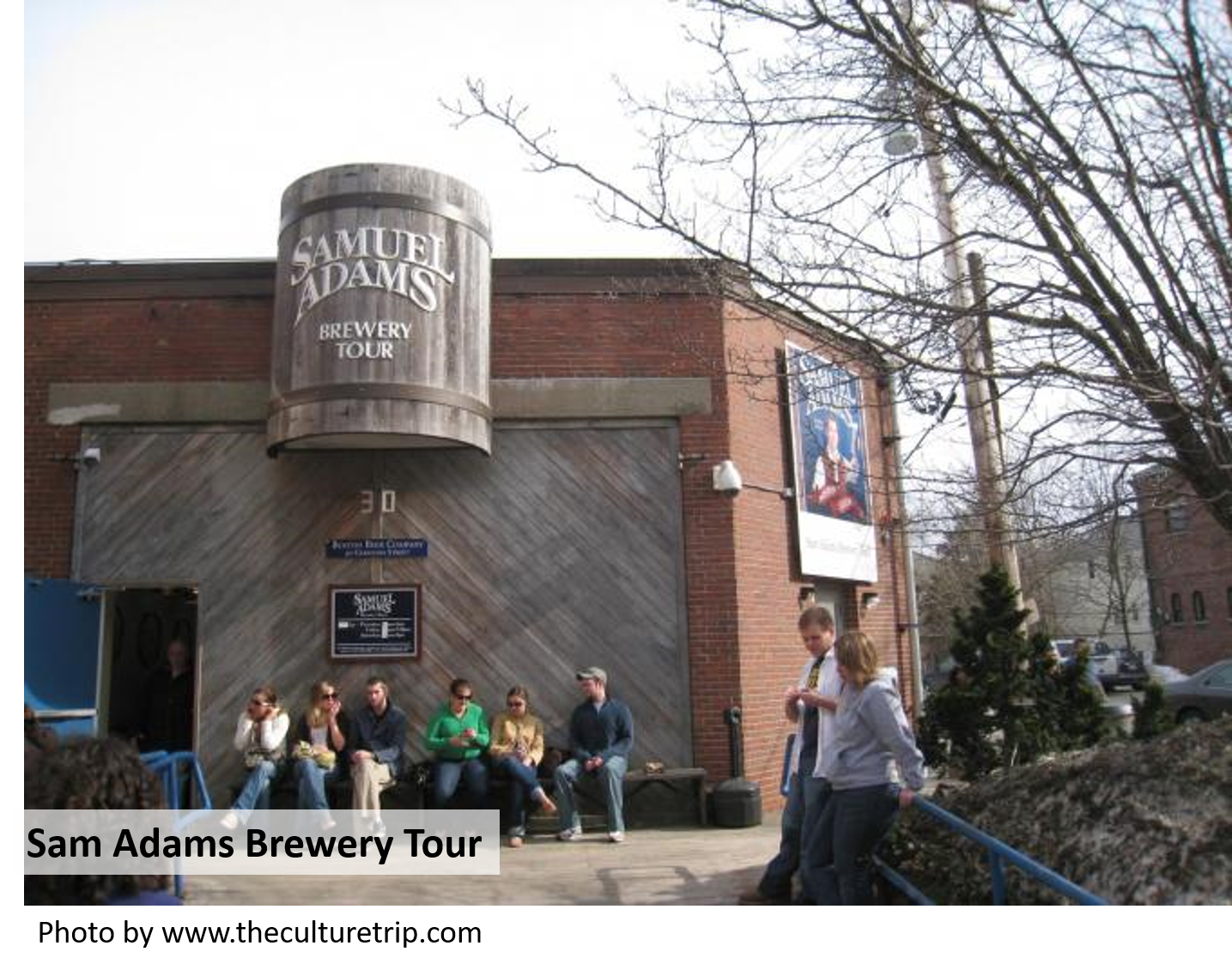 Boasting intelligent, witty tour guides, the Sam Adams Brewery Tour provides a chance to view the brewery process first-hand. Afterwards, visitors are encouraged to sample the speciality malts and smell the amazing whole-leaf noble hops. In addition, customers have the opportunity to learn about the Sam Adams: brewer, patriot and cousin of President John Adams.

The Soldier's Monument in Jamaica Plain is a Civil War memorial. It was erected by the Town of West Roxbury to honor the local men who served and died during that war. The statue at the top of the monument shows a solder, head bowed, resting on his rifle.

This is not a celebration of war or victory, it is a somber memorial to the hardship and pain the war had brought. Inside the memorial is a marble block with the names of those who lost their lives inscribed. There is also a stone with a brass plaque that was added about 100 years ago to honor the soldiers of the Revolution.

Tours of the Loring-Greenough House, the last surviving 18th-century residence in Sumner Hill, are offered to the public by volunteer guides from April through December. From January through March, tours are by appointment only: email docent@loring-greenough.org or leave a voicemail at 617-524-3158. 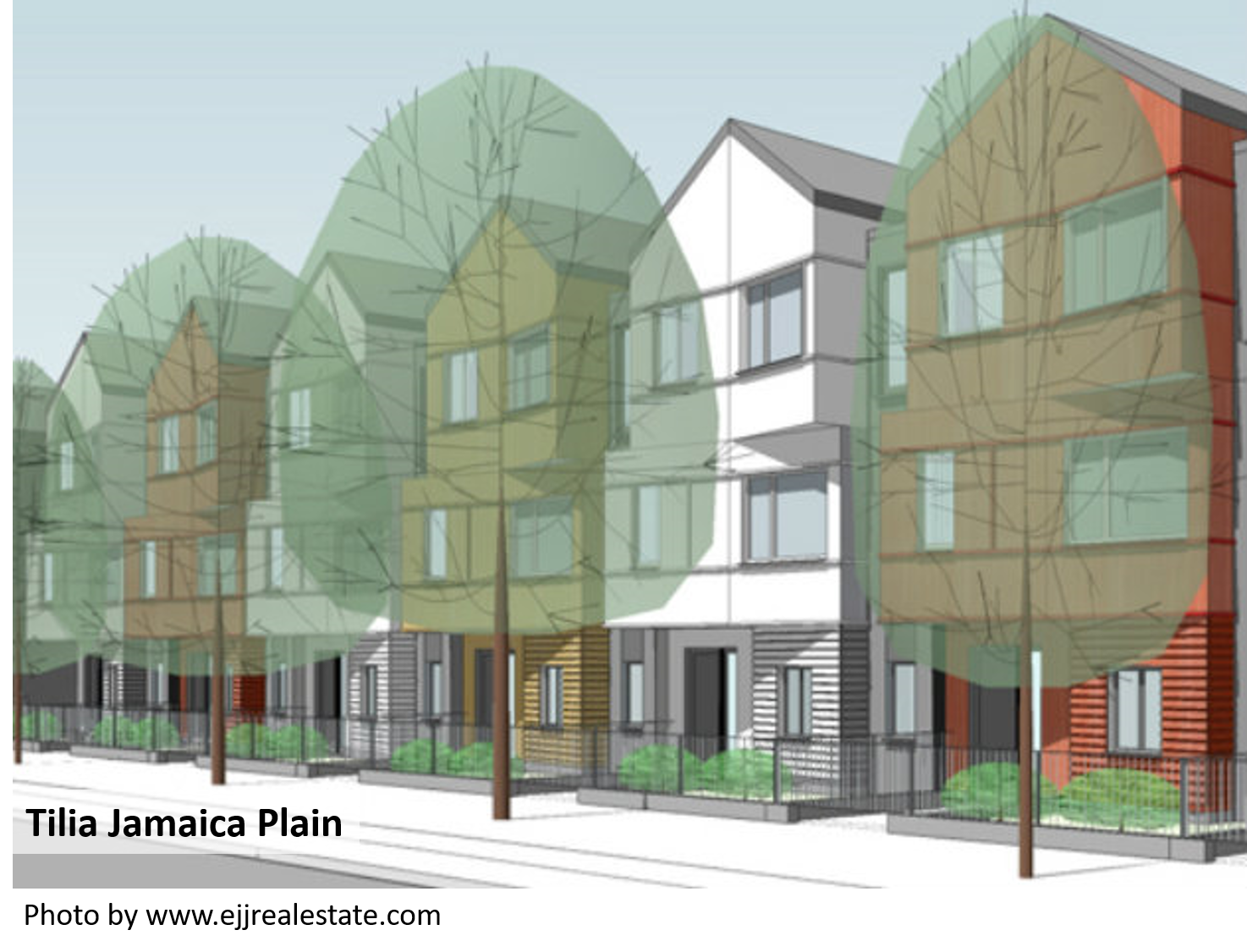 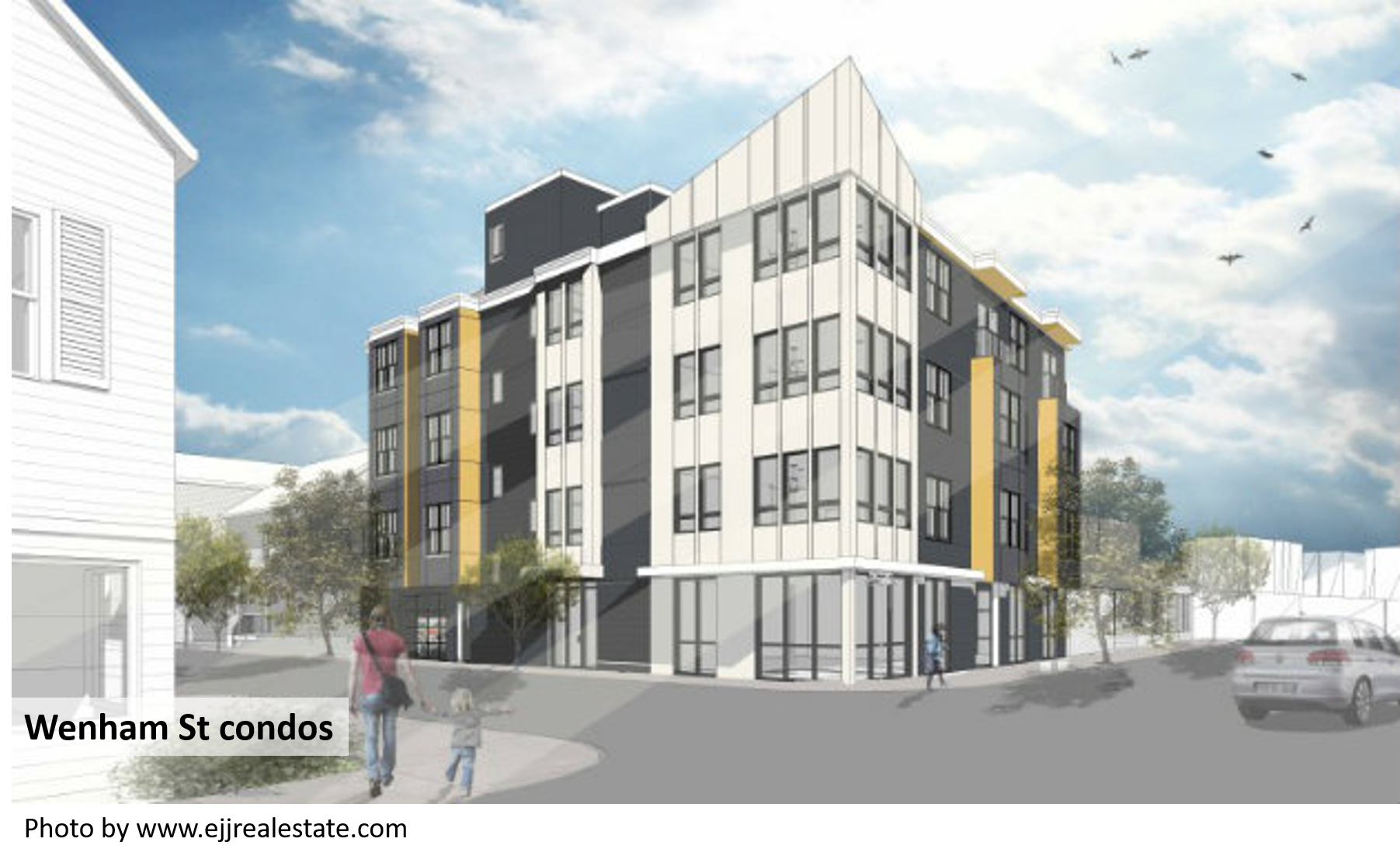 If plentiful public parks, hipster haunts, and colorful old Victorians sound up your alley, then JP might be your next move. Try navigating the market with our trusty neighborhood guide.

From the Latin Quarter in Hyde and Jackson Squares, to Centre and South area, to Forest Hills, to Sumner Hill, to Stonybrook area, to Egleston Square, to Jamaica Hills and every corner between — there are hidden gems to be found.